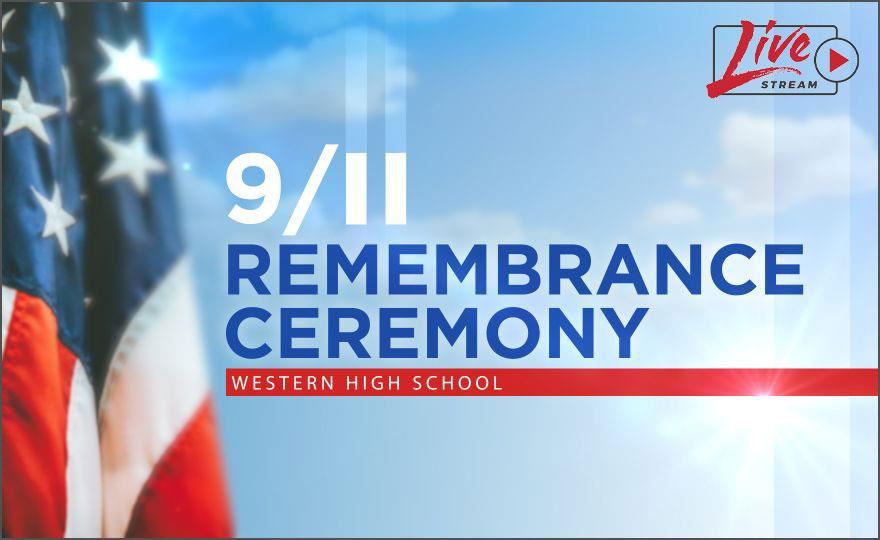 WHAT:Western High School hosts its 21st Annual 9/11 We Will Never Forget Memorial Ceremony, to pay tribute to the heroic men and women who lost their lives on September 11, 2001.

The 9/11 Memorial Ceremony will live stream at becon.tv/remembrance and broadcast live on BECON-TV (WBEC-TV channel 63).

WHY:Students at Western High School will pay homage to the thousands who lost their lives on September 11, 2001. Since 2002, the school has marked this day with a student-constructed memorial, which has served as a symbol for Western High students to host the We Will Never Forget ceremony. The monument replicates the Twin Towers, surrounded by the Pentagon, with a flagpole placed in the outline of the state of Pennsylvania. Local fire-rescue and law enforcement agencies will participate in the ceremony alongside Western High JROTC cadets, choral singers, band members and Student Government Association representatives. The program includes posting of a guard, a wreath placement, a fly over and a flag folding presentation. This is the first permanent memorial created in the United States to honor those lost during the events of 9/11. It was designed and built by students and was completed and dedicated in March of 2002.

MEDIA ARE INVITED TO COVER THIS EVENT.

“Educating all students to reach their highest potential.”

Broward County Public Schools (BCPS) is the sixth largest school district in the nation and the second largest in the state of Florida. BCPS is Florida’s first fully accredited school system since 1962, serving more than 256,000 students and approximately 110,000 adult learners in 240 schools, centers and technical colleges, and 90 charter schools. BCPS supports a diverse student population representing 170 different countries and speaking 147 languages. To connect with BCPS, visit browardschools.com, follow us on Twitter @browardschools, on Facebook at facebook.com/browardschools, and download the free BCPS mobile app.